Flesh of the gods: Over 4,000 years of goldmining in the Eastern Desert of Egypt and Sudan (Conducted in English) 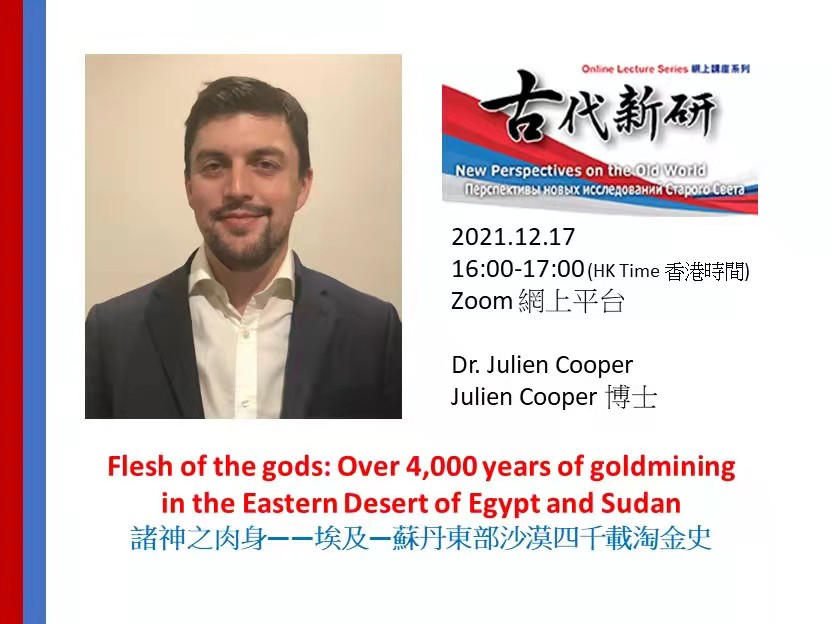 Julien Cooper received his Ph.D. in Ancient History at Macquarie University, Australia in 2016. He was then had postdoctoral roles at Oxford University (Nomadic Empires Project, ERC) and Yale University (Teaching Fellow in Egyptology). He joined RCHC in March 2021. His research interests lie in the areas of Egyptology, Nubiology, and African cultures. Julien directs an archaeological fieldwork project investigating the nomads and goldmines in Eastern Sudan, The Atbai Survey Project.

Abstract: The vision of gold in the popular imagination of Ancient Egypt is well-appreciated. The vision of gold in the popular imagination of Ancient Egypt is well-appreciated. From Tutankhamun’s death mask to gold-statues of deities, Egypt has a special relationship with the substance of gold – in their theological rhetoric, the very ‘flesh of the gods’. Accordingly, the scholarly and scientific study of gold objects, particularly jewellery, is well-developed. But despite this, very little is understood about the gold industry itself and the origins of gold in the deserts of Ancient Egypt and Sudan. This paper seeks to address a basic question: how did Egyptians, Nubians, and local nomads conduct gold mining in the desert? The overwhelming majority of Egypt’s gold wealth comes from distant mines away from the Nile river in the Eastern Desert of Egypt and Sudan, a vast desert region inhabited by local nomadic groups and providing extremely difficult conditions for mining parties from Egypt and Nubia. Using both the textual record and recent data from surveys in the Eastern Desert, this presentation will assess the main historical phases of mining in the Eastern Desert, its politics of cooperation and conflict, as well as the nature of the expeditionary and institutional apparatus that fueled the gold-industry.

This is the third lecture of the Online Lecture Series: New Perspectives on the Old World (2021/10-2022/6), which is co-organized by the HKBU Jao Tsung-I Academy of Sinology, the Institute of Oriental Studies (IOS), Russian Academy of Sciences, BNU-HKBU United International College (UIC) and Research Centre for History and Culture, Beijing Normal University.