China is one of the oldest civilizations, which has continuously remembered itself through an uninterrupted historical tradition over three thousand years. Despite this continuity, our knowledge of Early China has transformed comprehensively over the last few decades: an unprecedented influx of newly excavated data has in part confirmed and in part rewritten traditional histories. This encounter between traditional history and the new evidence, processed within the framework of modern academic disciplines, has raised new questions about the origin of Chinese culture, statehood, writing and literary traditions, as well as about China’s role in the shaping of Eurasian history. No doubt, the coming decades will witness more groundbreaking discoveries, which will prompt us to reconsider the history of China and the history of humanity. 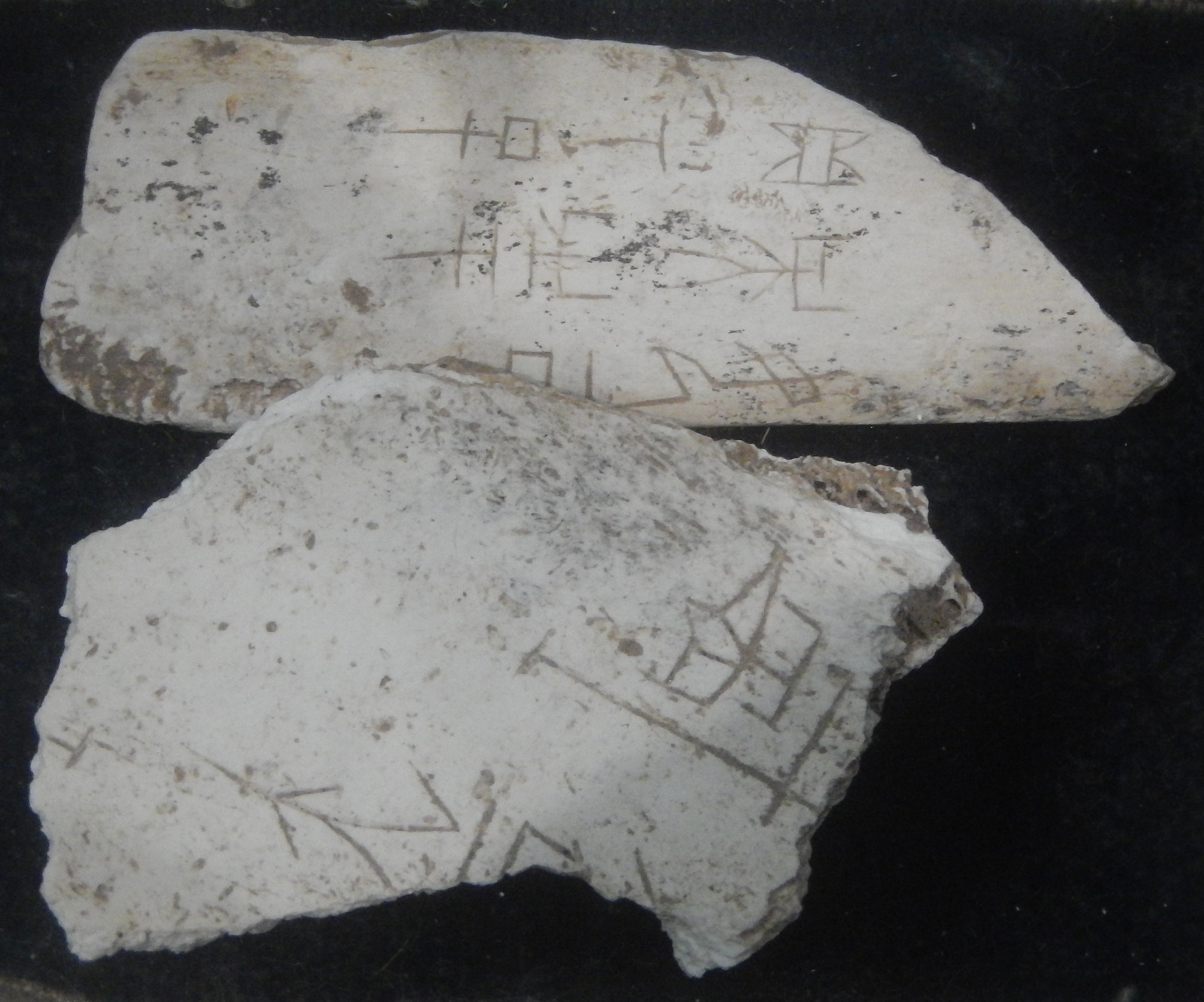 The origins of Chinese civilization are traditionally traced to the area along the middle flow of the Yellow River. Here, the first historical Chinese state of Shang 商 was established, probably first in the area of the modern-day city of Zhengzhou, before it was relocated to its last center in today’s

Anyang in Hebei (ca. 1300–1045 BCE). For several centuries, Shang controlled an impressive network of metallurgical production stretching across thousands of miles, which culminated in the casting of monumental ritual bronzes, whose sumptuousness and artistic qualities capture imagination of specialists and non-specialists alike. It was during the Shang period that Chinese writing was invented. For many centuries, this earliest writing remained forgotten, until it was discovered by chance in 1899 by Wang Yirong 王懿榮, who noticed ancient characters on the so- called “dragon bones” that were sold as a variety of traditional medicine. It became clear that the “dragon bones” were turtle plastrons and animal bones used by the Shang-dynasty diviners, and the inscriptions were incised on them as part of the divination. Through the pioneering efforts of such brilliant scholars as Wang Guowei 王國維, Luo Zhenyu 羅振玉, Dong Zuobin 董作賓, oracle-bones have rendered a plethora of details about this earliest period of Chinese history, previously known only from brief records that even some of the most eminent Chinese historians had considered fictitious.

In the middle of the eleventh century BCE, the state of Shang was conquered and gradually dismantled by their former western ally, Zhou 周. This conquest signalled the beginning of the Zhou dynasty (ca. 1045–256). The canonical texts, ritual norms, and moral ideals underpinning the Chinese culture took shape during this period. It was believed that the essential framework of Chinese culture was established by the early Zhou kings Wen 文 王 and Wu 武 王 as well as King Wu’s brother the Duke of Zhou 周公, China’s greatest culture heroes. 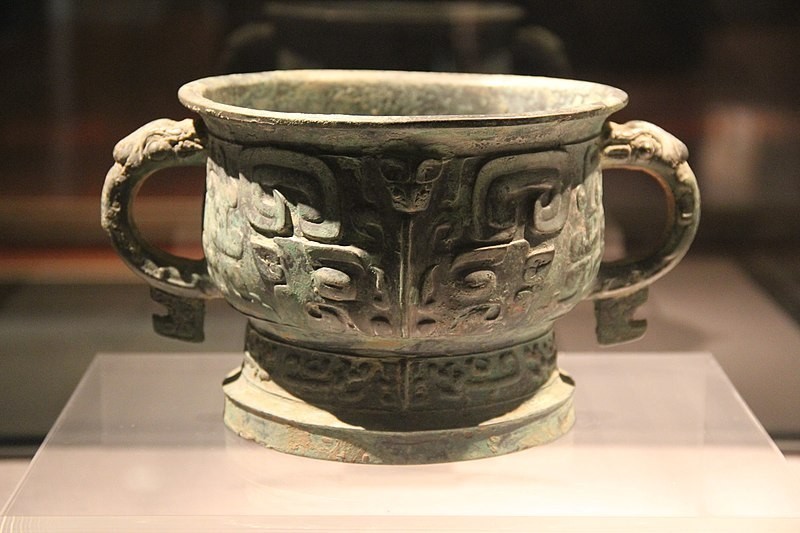 Having accepted the technological advancements of the Shang, the Zhou adapted them to their own practices. The pompous and cruel rituals of Shang, which frequently involved the killing of hundreds of victims, were replaced with the more restrained Zhou sacrifices. During the Western Zhou period (ca. 1045–771), the Zhou kings remained the main power in the Great Plains region.

However, their power was challenged by the pastoralist peoples alone the northern and western edges, as well as the increasingly strong state of Chu 楚 that had developed in the present-day

Hubei province, along the middle flow of the Yangtze, China’s other great river. In 771, in the aftermath of a bloody internecine struggle, the Zhou royal house lost control of their ancestral lands in the Wei River valley (area of the present-day Xi’an) and soon re-established themselves in Luoyang, 300 km to the east. These events marked the transition from the Western to the Eastern Zhou (ca. 770–256). Although the Zhou kings still maintained ritual supremacy, their political power dwindled, and they were often caught in the conflicts between the stronger powers, such as the state of Jin 晉to the north, Qin 秦 to the West, Qi 齊to the east, and Chu to the south. Until the establishment of the centralized Qin empire in 221 BCE, ancient China was a politically polycentric realm, where different states developed their independent interpretations of the Shang and Zhou legacies, their own systems of script, and their own literary traditions. This era also produced China’s most famous thinker, Confucius 孔 子 (551–479), who was born in the small state of Lu on the territory of the present-day Shandong province. Confucius’ lofty ideal of a morally responsible individual has guided generations of Chinese people, and today it continues to provide inspiration for people both within and outside of China. Apart from Confucius, other great philosophers flourished in the fifth-third centuries BC, such as Mozi 墨子, Mengzi 孟子, Xunzi 荀子, whose teachings became the target of continuous reflection for generations of later thinkers.

Apart from these historical events and individuals well known from continuous tradition, the archaeological discoveries of the last century have provided a glimpse of an entirely different and unknown ancient China. One of the greatest discoveries came from the misty basin of the Chengdu plain, which hosted the Sanxingdui 三星堆 culture (ca. 1600-1150 BC). Some of the ritual bronzes

discovered in Sanxingdui were produced in Shang, suggesting that there was exchange, possibly trade between the two cultures. But overall, Sanxingdui maintained its own highly distinctive culture and its own highly elaborate tradition of bronze metallurgy and its unique, immediately recognizable visual style. Before archaeologists discovered it in the 1980s, Sanxingdui was completely unknown. Its existence proved that the territory of modern China, in addition to the Central Plains region, encompassed other cultural centers, with comparably high degrees of technological sophistication and wealth. Most of the important artifacts of Sanxingdui come from two burial pits that have rendered an impressive amount of bronze and jade artifacts. In 2021, yet another larger burial pit was excavated, which has furnished a wealth of new material that, no doubt, shall lead to new important studies further clarifying the deep origins of China.

Last century has furnished a great amount of new textual data that allows to complement – and often challenge – the evidence of received sources. After the Shang oracle-bone inscriptions, the Western Zhou period has furnished thousands of inscribed bronze vessels. Although most such artifacts only contain very short texts of only 15 characters or less, some of them record elaborate texts of a hundred characters and more, which is comparable with the length of some of the most important received texts, such as the chapters in the canonical collection Shang shu 尚書 (Venerated Scriptures). These texts have shed new light on the foundational period of the Western Zhou, revealing important details concerning their political organization, administrative order, as well as their sophisticated ancestral ritual, to which most bronze vessels were intrinsically related. 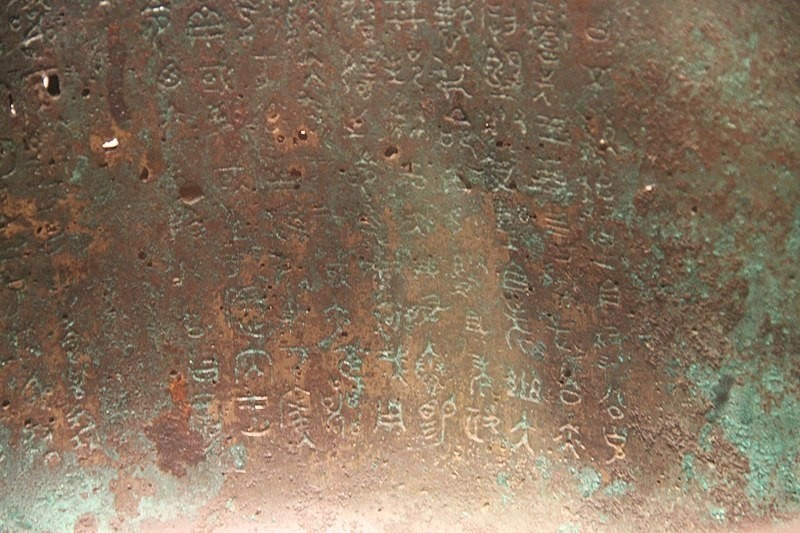 Although writing on bamboo strips was probably practised in China since the Shang dynasty, so far the earliest excavated bamboo manuscripts date to 433 BCE (the famous tomb of Marquis Yi of Zeng 曾侯乙墓). Only a handful of ancient tombs contain manuscript texts, but such discoveries have provided a revolutionary impetus for the study of early Chinese philosophy and textuality,

allowing scholars to study early texts in the previously unknown manuscript environment. To give one example, the a Warring-States tomb at Guodian 郭 店 has rendered manuscript counterparts of the Laozi 老 子 or the Daode jing 道 德 經 , the foundational text of Daoism. The significant differences between the received Laozi and these early manuscripts have led some scholars to suggest that the Guodian manuscripts represent an early stage in the formation of the text, before it acquired its present shape. More recent discoveries, such as the collections of bamboo manuscripts kept at Tsinghua and Anhui universities, have prompted scholars to thoroughly reconsider such texts as the Shang shu and the Shi jing 詩 經 (Canon of Odes), raising exciting new questions about their early history.