Egypt: the “Gift of the Nile”

Geography
Egypt is the land of the Nile River, and it owes much of its prosperity and agricultural fertility to the bounty that this river brings in its annual summer floods. For over three thousand years, the core area of ancient Egyptian kingdoms was more or less stable, situated between the first Cataract of the Nile in the south and the Mediterranean coast in the North. South of Egypt were the Kingdoms of Kush, also called ‘Nubia’, while Egypt’s north and eastern neighbours in Israel-Palestine changed dramatically throughout history. The deserts adjacent to the Nile are largely barren and uninhabited, although in some places nomadism was possible and small towns flourished in oases of the Western Desert. The ‘Lower’ part of Egypt near the Mediterranean coast witnesses a huge spread or fan of the Nile River over the flat alluvium, which we call ‘the Delta’. In ‘Upper’ Egypt the Nile forms an almost canyon-like environment flanked by cliffs, restricting the size of farmlands. Egyptian farmers grew crops on either bank of the river on the floodplain, a seasonally inundated part of the river. This flood was also key to the fertility of Egyptian agriculture. Without the need for any artificial fertilizing, the Nile flood would deposit rich silts on the riverbank, allowing for a great boon of fertility. Planting would begin as soon as flood waters received.

From prehistory to history

Along the banks of the river in the Fifth and Fourth Millenniums BCE, Egyptian culture began the slow transition from the Neolithic to the Bronze Age, showing signs of urban architecture, widespread farming of cereals and grains and a rich ceramic and burial tradition. Already in the prehistoric, there are signs that Egyptians believed in an ‘afterlife’, a second life spent in another sphere (the Netherworld) – the great care taken in the burial and the internment of goods with the burial are a testament to the rich traditions regarding this cultural practice. By 3100 BCE, previously independent Egyptian urban centres like Abydos, Naqada, and Hierakonpolis became unified under the authority of one leader, which we call a ‘Pharaoh’ (literally ‘Great House’). The first writing, Egyptian hieroglyphs, also arose in this period, first constituting a small group of signs acting as labels and eventually transforming into an expanded repertoire which could recreate spoken language and communicate long narrative texts on various medium such as stone, wood, and ‘Egyptian-paper’ called Papyrus.

By the Old Kingdom (c. 2700 BCE) the office of Pharaoh had centralized all decision making and economy in the entire land of Egypt – the power they yielded can be witnessed in their grand stone monuments they constructed which survive to the present day. The most famous of these are the Pyramids, most notably the Pyramids of Giza constructed by the pharaohs of the 4th Dynasty. These huge constructions, some of the largest monuments in world history, were grandiose burials of the King and consist of 2.3 million limestone blocks assembled to a height of 146 metres. Upon the death of a king, a complex set of rituals took place around the King’s burial. The King’s body was taken on a funeral boat to the pyramid complex itself and then eventually placed in a coffin and a sarcophagus (stone outer coffin). While this happened, priests and officials uttered many ritual incantations contained in a long set of spells called the The Pyramid Texts. 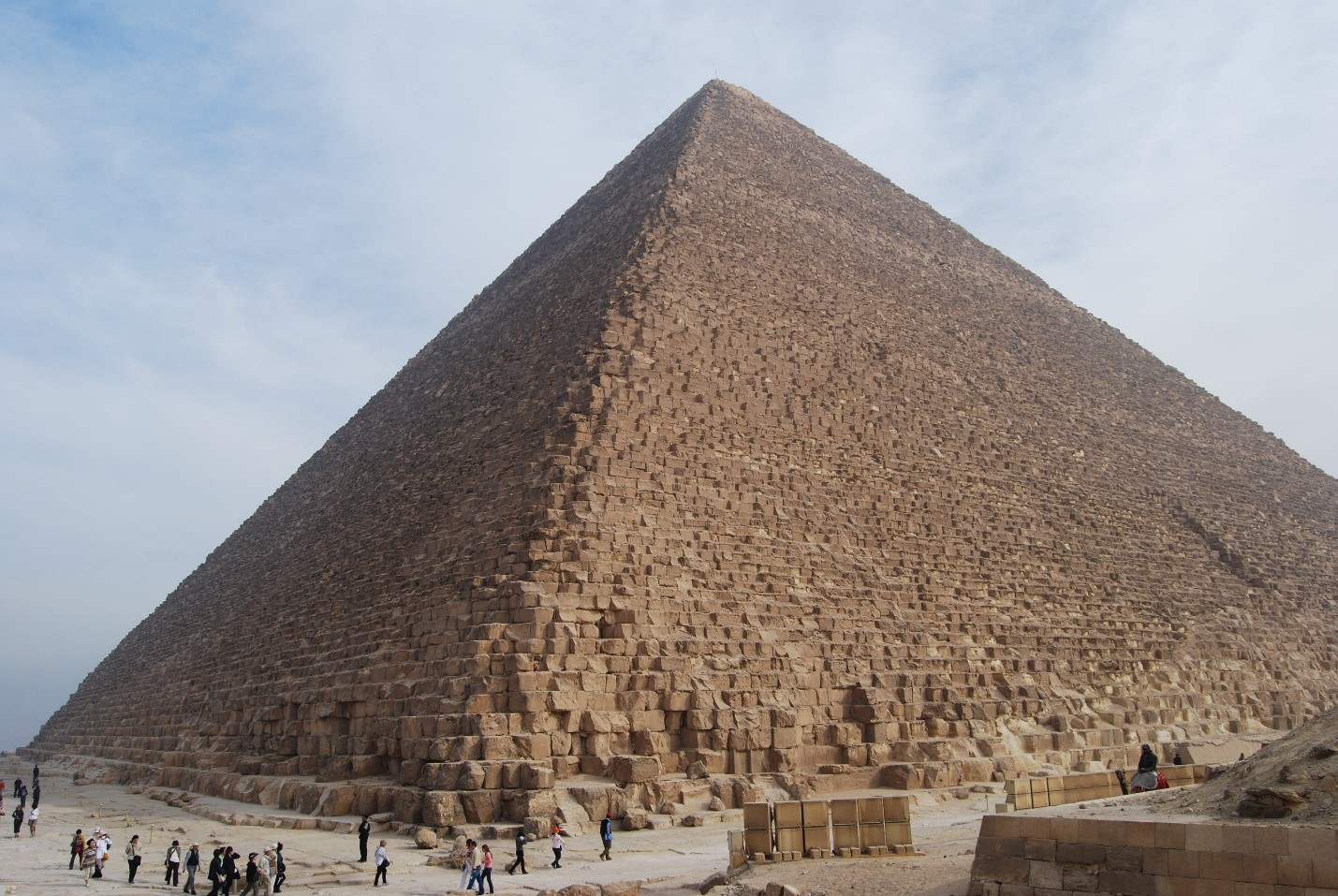 The several thousand years of Egyptian history was divided into dynastic families by the historian Manetho, a Greek speaking Egyptian priest of the Ptolemaic era who had access to old archives. There are approximately 30 dynasties, but this figure is a bit vague as not every ‘dynasty’ was a related geneaological family and some dynasties overlap. Dynasties 1-2 constitute the origins of the Egyptian state in the Early Dynastic, which is followed by the Old Kingdom (Dynasties 3-6), the age of the Pyramid builders. Next is the First Intermediate Period (Dyn 8-11), the term ‘Intermediate Period, is used to refer to periods of political fragmentation when there was no central authority but rather rival powers and dynasties in the land. Following this is Middle Kingdom (Dyn. 11-13) an artistic golden of art and classical literature. By the Second Intermediate Period (Dyn 14-16) foreigners had set up a rival dynasty in the Delta comprising of Semitic speaking Hyksos, while Egyptian sovereignty was checked by the Nubian power of Kerma. The New Kingdom (Dyn 18-20) is perhaps the height of Egyptian power, famous pharaohs of this period (Thutmosis III, Hatshepsut, Akhenaton, Tutankhamun, Ramesses II) controlled an empire of conquest stretching from deep into Nubia to the banks of the Euphrates River in Syria. Economic decline as well as battles and migrations with Libyans brought this period to a close and ushered in the Third Intermediate Period (Dyn. 20-25), a period characterized by foreign domination of not just Libyans but also Nubian Kings of the 25th Dynasty. Egypt’s last phase of independent power was the in the Late Period (Dyn. 26-31) which was followed by Graeco-Roman rule.

Ancient authors from outside Egypt, chiefly Greece and Rome, were frequent to note the strange and pious nature of Egyptians and their religion. What troubled them was the animalistic manifestations of many Egyptian gods, Anubis with a jackal-head, Ra with a falcon-head, or Hathor with a cow-head. This interpretation of Egyptian gods is partly a mistaken belief that gods were one and the same as the animal. Egyptian gods take on a myriad of complex forms and their association with animals was often used to emphasize a particular trait of the god. Anubis, the god of death and mummification, for example, was depicted with a jackal-head most likely due to the nature of this scavenging animal frequently exhuming graves in cemeteries. Other important gods like Osiris (the god of death and afterlife), Ptah (craftsmen-god), and Amun (a universal creator-god) had no animalistic manifestations and were instead depicted purely in human form. Each god had their own dedicated temple, and such temples could also be erected to deified King’s. The largest and most important of these temples was no doubt Karnak, the home of the god Amun who had become something like a ‘state-god’ of the Middle and New Kingdom’s.

Egyptian religion had a complex and rich set of mythologies and religious literature that praised gods and told stories of divine drama. Egyptian gods were both part of the natural universe and cosmos (the god Hapy for example was the Nile itself) and stories helped to communicate and explain the universe around them as well as act as a basis for continued rituals. One of the most well-known Egyptian stories is the story of Horus and Seth, a divine drama with moralistic tones describing rivalry over inheritance between the son (Horus) and the uncle (Seth). Other religious texts narrate complex rituals of the afterlife, the Book of the Dead for example was interned in Egyptians tombs and was a series of spells to be uttered by and for the deceased so that they may gain access to the afterlife. The crescendo of this practice was the ‘weighing of the heart’ a morality test which assessed whether the deceased heart was heavy with sin or light as a feather – if heavy it would be eaten by a lion-like beast called Ammit, if light the deceased could pass unhindered to their second life.

Egypt and the Outside World

Despite claims to the contrary, Egypt was not alone in the deserts of Northeast Africa and the deserts were far from empty. To the west were the Libyans, a largely nomadic group of potent foes of Egypt who would themselves become pharaohs. South of Egypt were the Nubians and the Kingdom of Kush, a strong Kingdom that was the origin of much of Egypt’s trade goods such as gold, incense, and exotic animals. Nubia and Egypt have a complicated history, at many times one neighbour invaded the other, and there were always a series of border fortifications between the two Kingdoms to protect their interests, while in the New Kingdom the Egyptian state annihilated the entity of Kush and colonized much of its lands. Likewise in the 25th Dynasty, Nubian King’s conquered Egypt and controlled it as a province. North and East of Egypt in the Levant were various groups of settled and nomadic groups. Egyptians had been trading with these people throughout every era, particularly the harbour cities of Phoenicia (mod. Lebanon). Pharaohs of the New Kingdom conquered most of Israel-Palestine and established a client-vassal relationship with local rulers. From c. 1100 BCE, new foes in the Near East such as the Hittites, Assyrians, and Persians, challenged Egypt from this region and eventually conquered Egypt under the Persians. From the north also came the last in a successive wave of conquerors of Egypt, the Greeks under Alexander the Great (332 BC) and his successor Ptolemy I. With the growing power of Rome in the Eastern Mediterranean, Egypt would eventually lose all its independence and become a Roman province with the last Ptolemaic ruler being the famous seductress, Cleopatra VII (30 BC).

Since the earliest pharaohs, Egyptians sent many expeditions to the adjacent deserts in order to trade but primarily in search of mineral wealth. The Eastern Desert and Sinai are one of the world’s richest mineral regions, and contains many valuable minerals such as malachite (eye-paint), copper, lead, gold, as well as gemstones like turquoise and carnelian. Egypt’s famous gold-wealth, encapsulated in famous objects like Tutankhamun’s burial mask, is largely a result of this gold wealth and expeditionary zeal. Expeditions also crossed the desert and established harbours on the Red Sea coast, trading with the distant land of Punt in the southern Red Sea and obtaining the prized product of myrrh for use in their temple rituals. Under the Ptolemaic empire, this Red Sea trade would reach new lands and become part of the southern ‘maritime silk road’, linking Egypt with India, East Africa and even lands as distant as Vietnam and China.